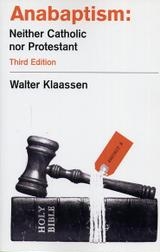 Anabaptism: Neither Catholic nor Protestant remains a classic description of the Anabaptist movement. Walter Klaassen's casual and inviting writing style, combined with his mastery of sixteenth-century historical sources, has resulted in a rare book: at once reliable, informative, and a pleasure to read.

Klaassen shows how Anabaptists combined elements of Protestantism and Catholicism into a third option which, he argues, has continuing relevance for the present. This is especially true in the areas of lay witness, peace and war, economics, and relationships with the state. Klaassen's hope that increasing numbers of Protestants and Catholics would enter into dialogue with the Anabaptist tradition has in fact been realized. Today, Anabaptism is accepted as part of the common heritage of all Christians.