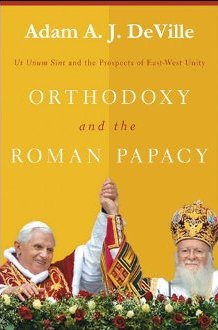 Among the issues that continue to divide the Catholic Church from the Orthodox Church -- the two largest Christian bodies in the world, together comprising well over a billion faithful -- the question of the papacy is widely acknowledged to be the most significant stumbling block to their unification. For nearly forty years, commentators, theologians, and hierarchs, from popes and patriarchs to ordinary believers of both churches, have acknowledged the problems posed by the papacy.

In Orthodoxy and the Roman Papacy: Ut Unum Sint and the Prospects of East-West Unity, Adam A. J. DeVille offers the first comprehensive examination of the papacy from an Orthodox perspective that also seeks to find a way beyond this impasse, toward full Orthodox-Catholic unity. He first surveys the major postwar Orthodox and Catholic theological perspectives on the Roman papacy and on patriarchates, enumerating Orthodox problems with the papacy and reviewing how Orthodox patriarchates function and are structured. In response to Pope John Paul II's 1995 request for a dialogue on Christian unity, set forth in the encyclical letter Ut Unum Sint, DeVille proposes a new model for the exercise of papal primacy. DeVille suggests the establishment of a permanent ecumenical synod consisting of all the patriarchal heads of Churches under a papal presidency, and discusses how the pope qua pope would function in a reunited Church of both East and West, in full communion. His analysis, involving the most detailed plan for Orthodox-Catholic unity yet offered by an Orthodox theologian, could not be more timely.

David Fagerberg, University of Notre Dame
"In Orthodoxy and the Roman Papacy: Ut Unum Sint and the Prospects of East-West Unity, not only does Adam A. J. DeVille give a historical and theological background to the thorny problem of the papacy in ecumenical dialogue; he also outlines what a reintegrated Church would look like by suggesting a way the papacy could function. Taking what both Orthodox and Catholic ecumenists have said, he paints a practical portrait of a unified Church. This is a novel and important contribution.

Vigen Guroian, University of Virginia
"John Paul II's remarkable encyclical Ut Unum Sint gives occasion for a comprehensive review and analysis of the steady, though often sputtering movement toward Orthodox and Roman Catholic rapprochement in our day. DeVille identifies the major voices, the churches involved, and assesses in particular the place and role of the Papacy in this process. Orthodoxy and the Roman Papacy does a great service in promoting the ecumenical conversation, and will be an edifying resource to all that are interested in it."

Michael Plekon, Baruch College
"Adam A. J. DeVille looks not only at the history of ecumenism from the Catholic side since Vatican II but also at more than a dozen of the leading Orthodox theologians internationally and their perspectives on the role and status of the bishop of Rome. Not since The Primacy of Peter: Essays in Ecclesiology and the Early Church, a collection of post Vatican II Orthodox views published over twenty years ago, has there been such an extensive and focused presentation of Orthodox points of view."

Adam A. J. DeVille is assistant professor of theology at the University of Saint Francis, Fort Wayne, Indiana.