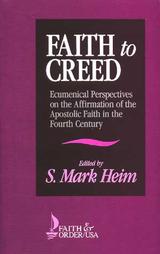 Published for the Commission on Faith and Order of the National Council of Churches, this series addresses matters of current concern and study among the members churches of that organization.

The Commision on Faith and Order of the World Council of Churches issued a call to the churches in 1982 to explore the meaning of the "apostolic faith" as a means to express visible unity. This fourth volume to appear in the Faith and Order series is part of the response of the North American member churches to that call.

As churches today struggle toward unity in faith, an increasingly cruciual question has become whether they can reach a common affirmation of the apostolic faith confessed in the Niocene (or Nicene-Constantinopolitan) Creed. The authors of this book seek to explore the historical and cultural setting of the creed's text in an effort to achieve an ecumenical understanding of its expression of faith in the fourth century, when it was formulated, as well as today.