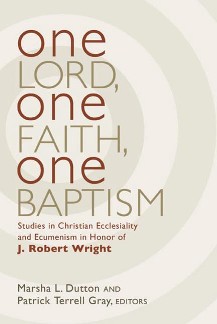 One Lord, One Faith, One Baptism gathers twenty-one articles from distinguished church historians, literary historians, and ecumenists — all written in honor of the Reverend Canon J. Robert Wright, St. Mark’s Professor of Ecclesiastical History at The General Theological Seminary of the Episcopal Church, who has been an inspiration to a generation of students and colleagues. The Most Reverend Frank T. Griswold, Presiding Bishop of the Episcopal Church, has written a foreword that complements the work of contributors such as S. W. Sykes, Richard A. Norris Jr., and George Tavard, among others. Though these articles differ in individual subject, they cohere in their relation to Dr. Wright’s expertise as a theologian, a historian, a medievalist, an ecumenist, and above all a man of the church.

"Here is a treasure chest of valuable short studies on topical issues in ecclesiology, Anglicanism, and ecumenism — a worthy tribute to the distinguished scholar it is designed to honor. This book will help many to serve the Church and its unity in a more informed and focused way; it is a theological resource that will be turned to again and again."
Paul Avis (General Secretary, Council for Christian Unity of the Church of England)

"I am very happy to see this book of essays in honor of my esteemed friend and fellow priest Bob Wright. Professor and Canon Wright, whom I am proud to have as an honorary assistant at Saint Thomas Church Fifth Avenue, has dedicated much of his life as a theologian and church historian to the quest for greater Christian unity. Father Wright’s particular gift to the ecumenical quest has always been his profound sense of the orthodoxy of the early church and his heartfelt loyalty to classic, catholic Anglicanism. It is a worthy endeavor to honor his long and faithful career, a personal priestly vocation that may fairly be called an era in its own right, with these articles and authors. Those many, many priests who have been shaped by his good counsel will cherish One Lord, One Faith, One Baptism."
Andrew C. Mead (Rector, Saint Thomas Church Fifth Avenue, New York)