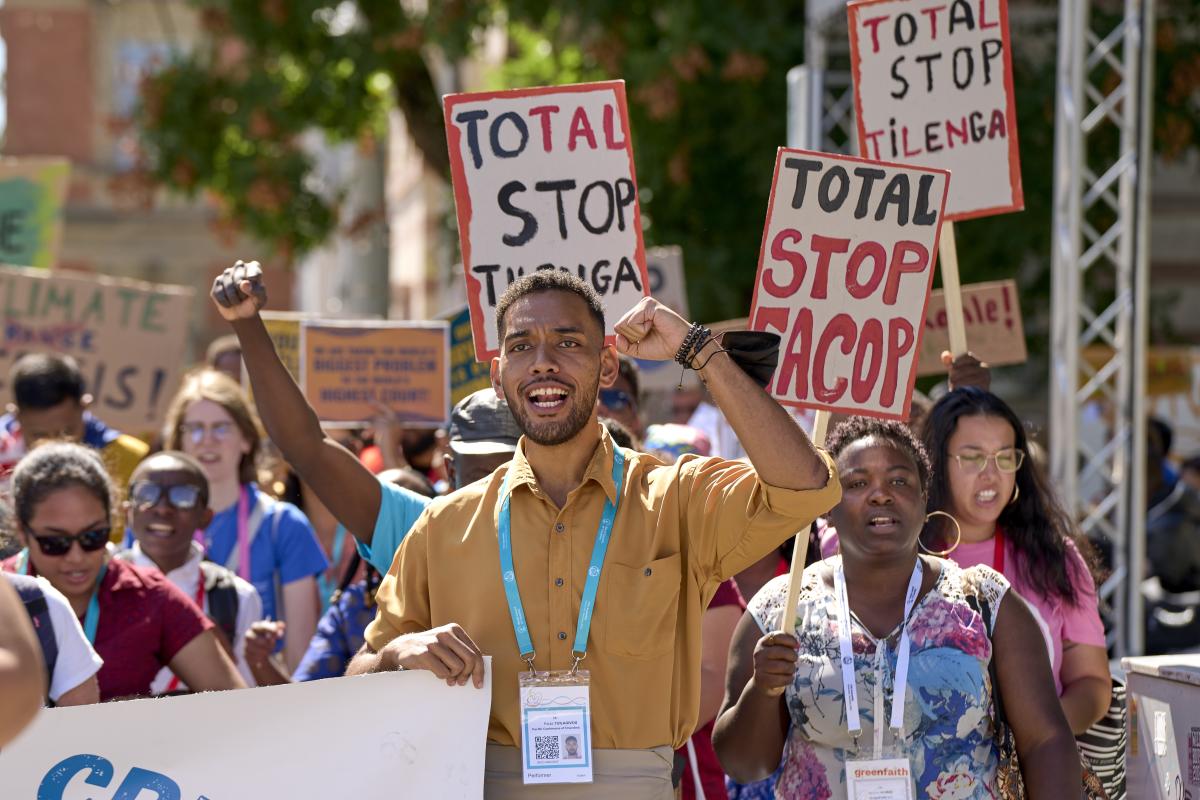 Activists demand attention to the climate crisis during a protest at the World Council of Churches' 11th Assembly in Karlsruhe, Germany. The Assembly's theme is 'Christ's Love Moves the World to Reconciliation and Unity'. Credit: Paul Jeffrey/WCC ~ Sept. 2, 2022
Archives

A statement from the World Council of Churches 11th Assembly, “The Living Planet: seeking a just and sustainable global community,” raises an increasingly urgent voice of concern and demand for action.

“We are all interdependent in God’s whole creation,” notes the statement’s introduction. “We are running out of time.”

We must repent from our continuing human selfishness, the statement urges. “Christ’s love calls us to deep solidarity and a quest for justice for those who have contributed to this emergency the least, yet suffer the most, physically, existentially, and ecologically,” reads the statement.

“Indigenous Peoples are among the first to face the direct consequences of climate change, due to their dependence upon, and close relationship with, the environment and its resources.”

However, the statement notes, Indigenous Peoples and the role they play in combating climate change through the restoration of the wholeness of creation, are rarely considered. “This must change, through a reimagining and deconstructing of the prevailing worldview and theology.”

The statement reads, “Action that does not recognize historic responsibilities for the drivers of the climate emergency and environmental degradation, and the injustice perpetrated against poor and vulnerable communities who are suffering the worst impacts while having the smallest carbon footprints, cannot qualify as faithful stewardship.”

The statement calls the world to urgently respond by expediting a just transition to renewable energy sources; reducing emissions; protecting fragile eco-systems; and protecting and fulfilling the human right to a clean, healthy and sustainable environment, among other actions.

The statement urges an “end to wars and military drills, and divestment from fossil fuel, arms and other life-destroying sectors, coupled with a radical mobilization and redirection of resources towards the health and resilience of our communities and the protection and renewal of ecosystems that form the base of all our economies and societies.”

The statement urges priority attention, in both word and deed, to the climate emergency.

“The Assembly joins the WCC central committee in urging all member churches and ecumenical partners around the world to give the climate emergency the priority attention that a crisis of such unprecedented and all-encompassing dimensions deserves, both in word and deed, and to amplify their efforts to demand the necessary action by their respective governments within the necessary timeframe to limit global warming to 1.5°C and to meet historic responsibilities to poorer, more vulnerable nations and communities,” the text reads.