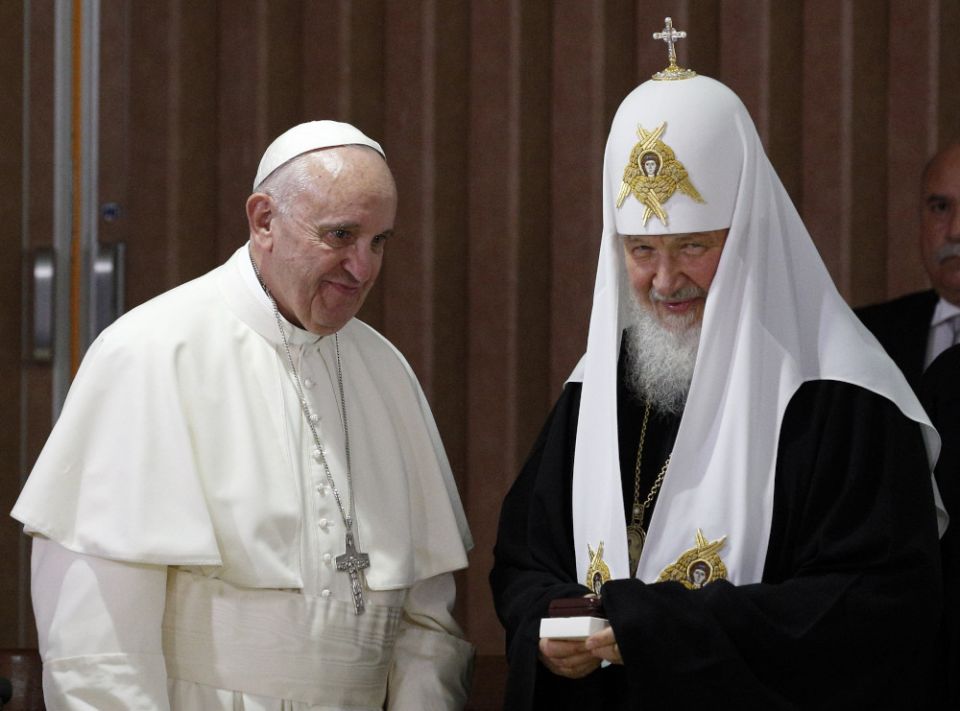 Patriarch Kirill of Moscow and Pope Francis meeting in Havana, Cuba. This was the first meeting between a reigning pope and a patriarch of Moscow. Credit: EPA ~ Feb. 12, 2016

Pope Francis said he plans to meet with Russian Orthodox Patriarch Kirill in September at an interreligious meeting in Kazakhstan.

The pope confirmed the meeting in an interview that aired in the United States July 11 on Univision, the Spanish-language network.

“We are going to meet in Kazakhstan in September because there is a religious meeting” there that both have promised to attend, he said.

Although the Vatican has not officially announced the visit, Kazakh authorities said the pope confirmed his participation at the Congress of World and Traditional Religions during a Zoom meeting in April with President Kassym-Jomart Tokayev.

The interreligious meeting will take place in the capital city, Nur-Sultan, Sept. 14-15.

Despite their opposing views on Russia’s invasion of Ukraine, the pope told Univision that he has “a good relationship” with the Russian patriarch.

However, he said, “it is evident that his position is conditioned by his homeland in some way; which is not to say that he is an indecent man. No; God knows each person’s moral responsibilities in the depth of their hearts.”

The pope also commented on the abrupt dismissal of Metropolitan Hilarion of Volokolamsk as head of external relations for the Russian Orthodox Church.

In a statement released June 7, the Russian Orthodox Church said the metropolitan was “released from his duties” and appointed administrator of the Diocese of Budapest and Hungary.

The pope told Univision it was “obvious that the war has had a great impact on the Russian church.”

“The change in the Ministry of External Relations of the patriarchate shows that there is some sort of issue,” he said. “I’m not saying it is a good or bad thing, and I say it with all due respect.”

The pope first spoke of the request in an interview with Reuters published July 4, prompting a denial from the Kremlin that such discussions had occurred.

“Such a summit visit needs to be discussed, it needs to be prepared but, to my knowledge, there are no substantive contacts to that effect for now,” Kremlin spokesman Dmitry Peskov told journalists July 6.

The pope said Lavrov “greatly appreciated the gesture” and that “he would keep it in mind but nothing happened.”

“In any case, if I can’t go to Moscow, before or after, I will go to Kyiv; I will certainly go,” he said.

Pope Francis added that he does not know when he will visit Ukraine “because we have to adapt to the timing (and) to a thousand things. But soon, hopefully.”