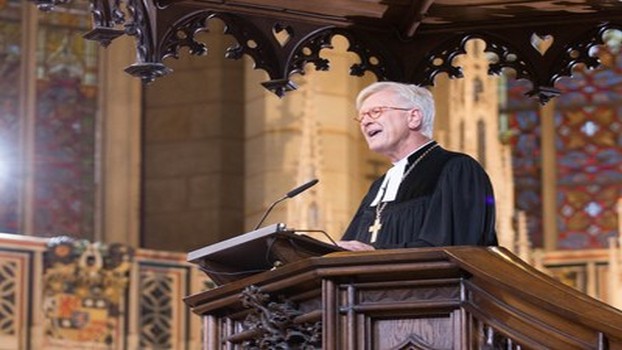 The events set in motion by Luther’s 95 Theses led to the separation of Western Christianity into Roman Catholic and Protestant churches.

However, “Luther did not want to found a new church but to call the Church of Jesus Christ back to its Lord,” said Bedford-Strohm.

The Reformation pitted Roman Catholics and Protestants against each other for centuries.

But today Christians understand that the church must not longer be divided, said the bishop.

“No one should think that we can be induced to stray from the path towards visible unity in reconciled diversity,” said Bedford-Strohm.

During the service, Bedford-Strohm presented Cardinal Marx with a cross of reconciliation from St Michael’s church in Hildesheim, where Protestant and Roman Catholic leaders held an ecumenical service for “healing of memories” in March 2017.

“For the first time in history, it not the building up of barriers but reconciliation that is at the centre,” said Bedford-Strohm handing the cross to Cardinal Marx as the two church leaders stood side by side in front of the congregation.

“We have taken steps toward each other, and do not want to go back again, said Cardinal Marx.

The cross was then offered by the two church leaders to president Steinmeier, as a symbol, said Marx, of the churches’ commitment to reconciliation in society.

Bedford-Strohm said he hoped the process of reconciliation between churches could send a message to a world threatened by conflicts and divisions.

The Reformation year began on 31 October 2016 with a service at Lund cathedral in Sweden where Pope Francis and leaders of the Lutheran World Federation gathered to repent for past divisions and to commit themselves to common witness and service in the world.

In his sermon, Bedford-Strohm paid tribute to the pope’s signs of reconciliation between churches.

But the bishop also acknowledged Luther’s invectives against Jews and Lutheran persecution of Anabaptists for which Protestants had now asked forgiveness.

WCC general secretary Tveit was presented as a representative of churches worldwide with a facsimile of the 95 Theses, symbolising the contribution of Reformation churches to the whole of world Christianity.

“Give us the power to forgive and courage to practise reconciliation” said Tveit during the intercessory prayers. “Lead us on the path to unity in Jesus Christ.

Speaking after the service, Tveit described the commemoration as a sign of hope for the church and for humanity.

“For the first time in five centuries, we have been able to commemorate the Reformation ecumenically,” Tveit said. “We have together offered repentance for the divisions of the past and affirmed what we have in common in Jesus Christ.

“This is a powerful symbol of our mutual accountability and one that has enormous potential for strengthening hope as we demonstrate a real willingness to repent, to change, to see what is wrong, and to contribute to changes and transformation toward just peace.”