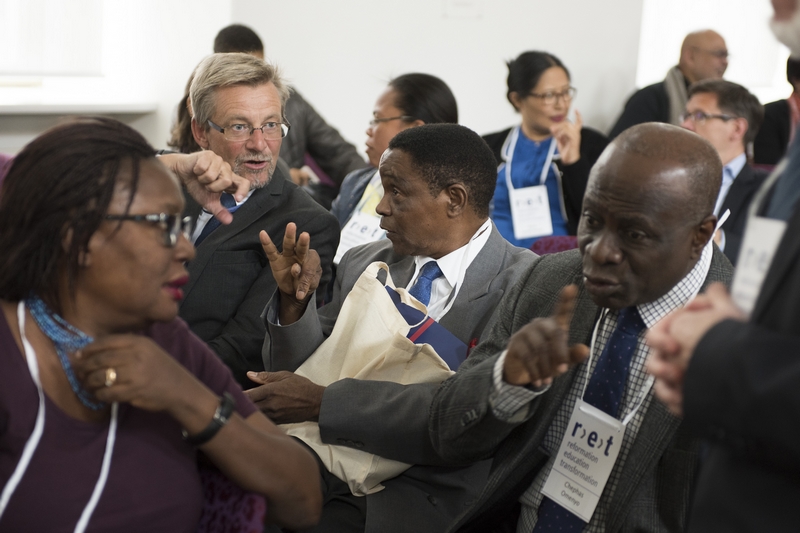 Participants at the Reformation–Education–Transformation consultation in Halle, Germany. Credit: Falk Wenzel ~ May 18, 2016
By Stephen Brown, for WCC News

More than 120 people from throughout the world have gathered in the eastern German city of Halle to reflect on how insights from the Protestant Reformation 500 years ago can contribute to transforming the world today.

“We want to initiate and encourage a truly ecumenical and global dialogue on the achievements, current challenges and new learnings about the relevance of Reformation principles,” said the Rev. Cornelia Füllkrug-Weitzel, president of the German Protestant development service Bread for the World, at the opening of the 18-22 May conference.

The Halle gathering is the second stage of a “Twin Consultation” on “Reformation – Education – Transformation” that began with a conference in São Leopoldo in Brazil in November 2015.

In advance of the Reformation Jubilee in 2017, the project aims to examine the contribution of Reformation traditions and theology to strengthening and transforming civil society to promote justice, peace, sustainability and human rights, both locally and globally, with a special emphasis on the role of education.

“2017 will not be an event that looks back historically but an occasion to reflect where reform and reformation is needed today in church and society,” the Rev. Margot Kässmann, ambassador of the Evangelical Church in Germany (EKD) for the Reformation Jubilee, told the Halle meeting.

The idea of holding two consultations in Brazil and in Germany – with some participants attending both meetings – is to reflect on the same thematic areas in two different global contexts as a contribution to the 500th anniversary of the Reformation and its impact on society.

“Nowadays we see the chances to learn from our different contexts, freed from the narrowness of our territories, to discover the transformative power of the Reformation,” said Bishop Jan Janssen, chairperson of the board of the Association of Protestant Churches and Missions in Germany (EMW), pointing to a “globalized world of new networks, neighbourhoods and new nearness”.

In a keynote address, the Rev. Jerry Pillay, president of the World Communion of Reformed Churches, referred to the consequences of globalization on the economic, political, cultural and religious spheres of society.

“Migration, whether forced or voluntary, changes in family structures, economic, ecological and social pressures have encouraged mobility which has created multiple social and religious identities,” he said. At the same time, racism and ethnic and religious violence in Africa, the United States and across the globe are threatening peace.

“These new realities are changing the way we do theology today,” Pillay said.

The Halle conference is taking place at the Francke Foundations in Halle, founded by the theologian August Hermann Francke in 1698 as an educational and social organization for the poor.

Welcoming participants, the institution’s director, Dr Thomas Müller-Bahlke, noted that the main issues at the consultation can be traced back to the history of the Francke Foundations. Francke, he said, believed that education was a key to the development of society. Today, there are 4000 people learning, teaching and living at the Francke Foundations.

Halle belongs to a region closely linked to the life and work of Martin Luther, whose dispute in 1517 with the papacy over church abuses set in train the events that led to the Reformation and the division of western Christianity into Roman Catholic and Protestant churches.

However, eastern Germany is also the most secularized region in the world, sociologist Dr Monika Wohlrab-Sahr of the University of Leipzig told the consultation in an opening address. This has its roots in four decades of communist rule from 1949 to 1989, as well as other factors dating back to the 19th century, she said.

The issue of communicating the Christian message in secular situations will be a special focus of the Halle meeting. A panel discussion on 19 May, including Bishop Ilse Junkermann of the Evangelical Church in Central Germany, will focus on the role of churches and Christians in the public sphere in eastern Germany.

The “Twin Consultation” is a joint project of Bread for the World, EMW, Faculdades EST São Leopoldo and the Francke Foundations and the Martin Luther University of Halle-Wittenberg in cooperation with the World Council of Churches, the Lutheran World Federation, the World Communion of Reformed Churches and the Evangelical Church in Germany.