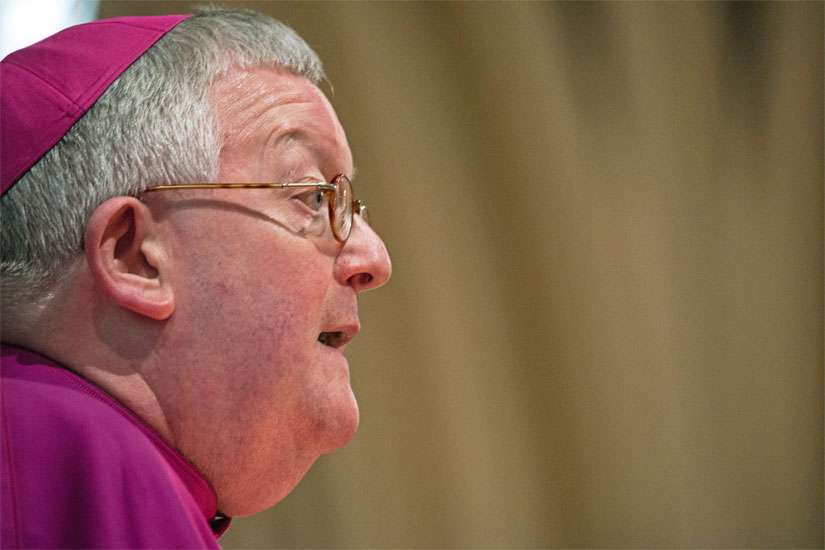 British Archbishop Bernard Longley, co-chair of ARCIC III at the 2016 meeting in Toronto. Photo by Michael Swan
By Michael Swan, The Catholic Register

The official dialogue sponsored by the Vatican and the Archbishop of Canterbury is meeting in Toronto until May 18, when a concluding communique is expected from the meeting of 22 bishops, theologians and support staff. It is the first time the body has met in Canada and, to the knowledge of the participants, the first time in 50 years that ARCIC has met during Pentecost, when the Holy Spirit first revealed the global unity of the Christian message expressed in the diversity of languages from around the world.

ARCIC III expects to publish its first book within the next four months, said Moxon. The Anglican representative to the Holy See in Rome is currently in negotiations with publishers to bring out Towards a Church Fully Reconciled, a series of essays that “will tackle the tough difficulties,” Moxon said.

ARCIC has looked at its work since the Second Vatican Council and divided the issues into three categories — areas of agreement, issues on which the churches are still seeking agreement and areas of disagreement.

Despite 80-per-cent agreement on such questions as Church structure, Eucharist, liturgy and ethics, disagreements on ordination of women to the priesthood and as bishops, ordination of openly gay bishops, blessings of same-sex relationships and moves in some parts of the Anglican communion to redefine marriage to include same-sex unions have derailed or slowed talks over the past decade.

The current topic of discussion at ARCIC is meant to meet these controversies head-on, said Canadian Anglican Bishop Linda Nicholls.

“If we’ve come to so much agreement in ARCIC I and ARCIC II, why is it we’ve arrived in such different places (on sexual equality and sexual ethics)?” asked Nicholls, summing up the current work of the commission. “We’re almost so close that the last little bit is so hard.”

Nicholls is also a member of the Anglican-Roman Catholic Dialogue of Canada, which, since it was founded in 1971, has always had at least one member on the international body. The Canadian group scheduled its meeting this year to overlap with the international meeting in Toronto so there could be discussion between the two levels, Nicholls said.

ARC plans to publish this year a collection of all the ARCIC II papers issued between 1983 and 2005, ending with “Mary: Grace and Hope in Christ.” The Canadian collection of these documents will also include commentary and essays.

That there are tough issues and serious disagreements “cannot be an excuse for doing little or nothing,” Archbishop Bernard Longley, the British Catholic co-chair of ARCIC III, said in his homily at evensong in St. James’ Cathedral.

ARCIC is now faced with questions that did not exist at the beginning of the official dialogue, said Longley. While there’s been a lot of focus on the Anglican storm over same-sex marriage, Catholics have their own issues when it comes to moral teaching, including the reception of Humanae Vitae, said Longley. The Church’s official teaching against artificial birth control has failed to persuade many married Catholics. A 2011 study found that only two per cent of Catholic women between 15 and 44 in the United States use natural family planning and a 2014 survey of 12,000 Catholics in 12 countries found that more than 90 per cent of Catholics in France, Brazil, Spain, Argentina, and Colombia have no problem with artificial birth control.

Official ecumenical dialogues have traditionally called upon some of the most distinguished thinkers in theology and church history to contribute to their work. Including the 1967 preparatory commission’s Malta Report, the three stages of ARCIC have produced 20 agreed statements which have included thorough examinations of the theologies of Eucharist, ordination, the Church as Communion, authority and leadership and the role of Mary in the Church. But when it comes to how the Church actually understands and carries out official teaching, the dialogue may in fact need the help of sociologists and others in the social sciences, said Boston auxiliary Bishop Art Kennedy. The dialogue can’t be maintained in a closed room sealed off from the life and culture of the Church on the ground, he said.

“We all live in this post-modern culture. It’s in the air that we breathe,” said Kennedy.

Getting the achievements of ARCIC to date translated from theological papers into practical pastoral plans and programs is going to require help from ARCIC’s big brother, the International Anglican-Roman Catholic Commission for Unity — IARCCUM. This organization of bishops was established in Toronto in 2000 and maintains a web site at iarccum.org.

[IARCCUM] hopes to bring together 36 pairs of Anglican and Roman Catholic bishops in Rome Oct. 5 and 6 for a meeting with Pope Francis and Archbishop of Canterbury Justin Welby.

“Now the time has come for it to become an action,” said Moxon.