“Racism is tearing the United States apart,” he said, citing a conversation he had with Jim Wallis, founder of Sojourners and author of “America’s Original Sin,” a book about racism. Tveit then raised the question: “If you ask the same question of Europe — what is Europe’s original sin?” 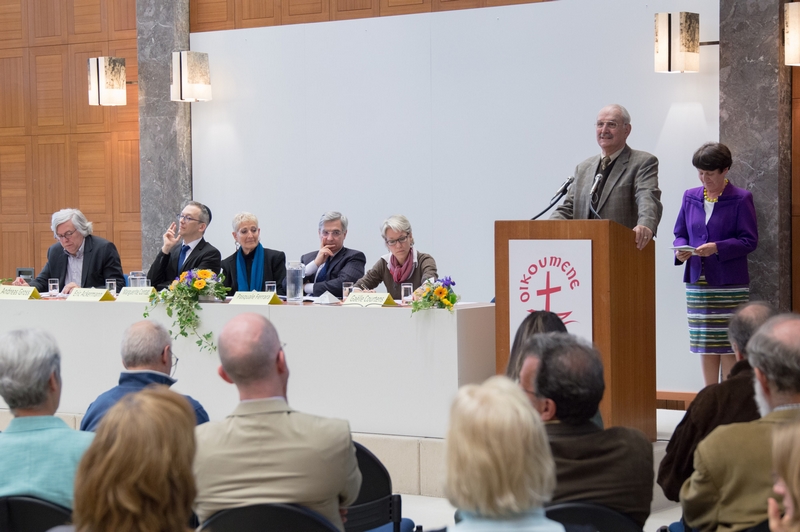 Another panelist, Pasquale Ferrara, is a diplomat, as well as a professor at the LUISS University, Rome, and the Sophia University Institute, Loppiano. He spoke about the what creates a sense of unity yet maintains diversity. “We need to cultivate a responsible vision of a future in which identities are imaginatively combined, in which they are not suppressed, but rather develop together, become richer, and work together for a more just, fairer world,” he said.

Humility is also a key characteristic that will enable us all to live together, added Erik Ackermann, a member of the Jewish community in Geneva. “Our beliefs should be logically presented, but with humility, and that humility should enable us all to live together,” he said. “If humans are made in the image of God, when I draw close to someone else, then I am inevitably drawing close to God.”

Europe is not only passing through a major political, economic, social and moral crisis, and a crisis in security, but it is also having to confront the greatest migration crisis since the Second World War, said Gaelle Courtens, a journalist associated with the Federation of Protestant Churches in Italy and the ‘nev-notizie evangeliche’ Press Agency. “That is an explosive mix that presents a serious threat to the structure of Europe itself,” said Courtens. “The rise of xenophobic, anti-Semitic and islamophobic movements of the extreme right clearly shows that.”

Marguerite Contat, former head of delegations at the International Committee of the Red Cross, and joint president of the Genevan Constituent Assembly, served as chair of the discussion, and attempted to summarize the reflections of the group on rethinking a European identity that nurtures life, innovation and creative imagination — and how religious life fits into that.

“We have discussed the question of religious integration,” she said. “I believe that, more than ever, religion or religious communities have a role to play, and they must use that role, not to claim that their faith is superior, but rather to share the magnificent riches that they have among the diversity of our populations.”