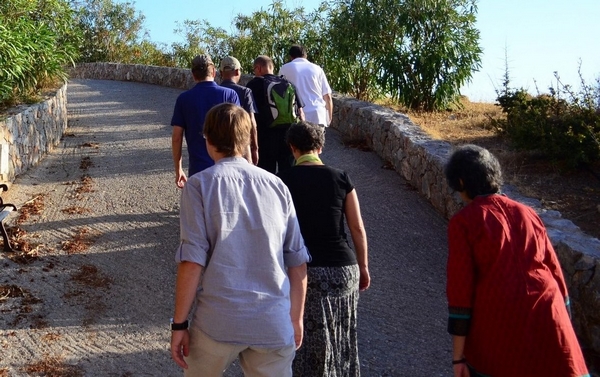 Thousands of people are planning to embark on a pilgrimage of climate justice – either on foot or on bicycles – in many parts of the world.

These faithful pilgrims, rooted in their religious beliefs, want to express solidarity with those affected by climate change – urging world leaders to produce a legally binding and universal agreement on the climate at the upcoming United Nations Climate Change Conference (COP21) in Paris.

These pilgrims, mostly from Europe and Africa, are mobilized by Christian organizations representing members of the World Council of Churches (WCC). Some will end their journey in Paris, uniting their voices with other faith actors at the COP 21 to be held from 30 November to 11 December 2015.

“Paris is a milestone in our pilgrimage of climate justice,” said Dr Guillermo Kerber, WCC programme executive for Care for Creation and Climate Justice. “Yet Paris is not a destination. As people of faith, expected to offer a moral compass to climate dialogue, we need to strategize for 2016 and beyond,” he said.

Kerber was speaking in a COP 21 preparatory meeting for ecumenical organizations held on 22 January in Geneva, Switzerland. The concept “pilgrimage of justice and peace” is a vision promoted by the WCC 10th Assembly, and climate justice is a significant component of this vision.

Following calls for climate justice by religious leaders such as Patriarch Bartholomew of Constantinople and Pope Francis of the Roman Catholic Church, the WCC is planning to bring strong voices from religious communities demanding a fair, ambitious and legally binding treaty in Paris, said Kerber.

In Africa the “pilgrims of climate justice” are planning to cross borders on foot and bicycles, raising awareness about the impact of climate change. Patriciah Akullo of the ACT Alliance, a partner organization of the WCC, shared information about her organization’s campaign for climate justice, coming into force around COP 21 with a focus on Africa. She said that after crossing borders between South Africa, Uganda and Burundi among other countries, these pilgrims’ final destination will be Nairobi.

Celebrities expected to add their voices to the campaign are Archbishop Desmond Tutu and Kenyan President Uhuru Kenyatta, with others from the fields of sports, culture and music.

“Pilgrimage to COP 21 is a pilgrimage of justice and peace, for people and for earth,” said Isaiah Toroitich, working for the campaign Act Now for Climate Justice. “As people of faith we hope to speak in one united voice in Paris demonstrating our solidarity with those affected by climate change,” he said.

Thomas Hirsch from Bread for the World said that as people of faith “we are united in our diversity through our efforts and our pleas for climate justice to be heard at COP 21”. The planning of initiatives from the churches, ecumenical organizations and their faith partners were called “motivating” by Hirsch. However, he said the “momentum of these efforts can go down if COP 21 is not able to deliver”.