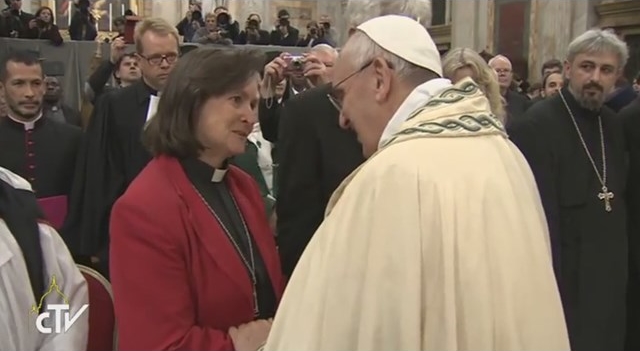 Rev Tara Curlewis, former General Secretary of the National Council of Churches in Australia, speaks with Pope Francis at Ecumenical Vespers for the Week of Prayer for Christian Unity, January 25 in the Basilica of St Paul Outside the Walls. Photo: Vatican Radio
By Philippa Hitchen, Vatican Radio

Rev Curlewis says the Uniting Church of Australia was formed in 1977 after a very long conversation that began in about 1901 between different denominations including the Methodists, Presbyterians and Congregationalists who are now part of the new union. There have been struggles, she says about what each Church brings from its own tradition, but they deliberately call themselves Uniting (rather than United) to reflect the fact of being on a journey that other Christians are welcome to join as well…

Rev. Curlewis believes that some dialogues are seeking greater understanding of another Church, while others are moving towards “a deeper place of sharing” together. Regarding the goal of the ecumenical movement she says we should look at the words of Christ when he prayed “that they may be one” just as the Father, the Son and the Spirit are one. While the mystery of the Trinity is not easy to understand, she says, it speaks of the unity of “three persons distinct in their own being and modes of operation” and that, she says, is a model for the Churches today.