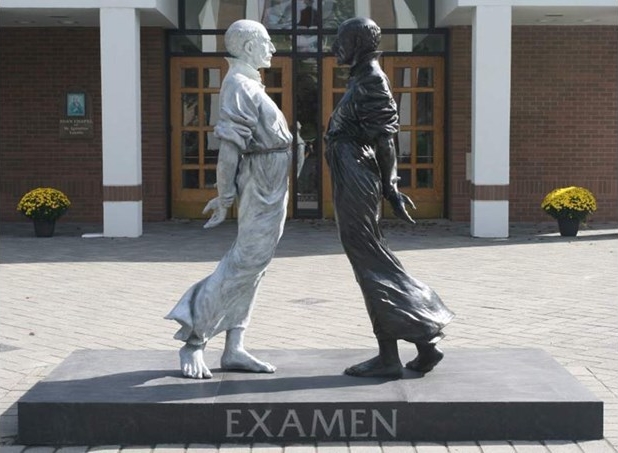 Examen, a sculpture depicting St. Ignatius of Loyola's central spiritual practice of examination of conscience. The sculpture stands in front of the chapel at the Jesuit's Fairfield University, Connecticut ~ June 2013
Archives

An international conference of ecumenists concluded at Fairfield University in the U.S. on Thursday with the signing of a covenant committing participants to the continued search for unity and reconciliation between all the Christian churches. Philippa Hitchen was at the conference and sent this report:

This third Receptive Ecumenism conference was billed as a kind of ‘coming of age’ party for a movement born almost a decade ago at Durham’s Centre for Catholic Studies in the north of England. Based on the premise that partners in dialogues should discover what gifts they could receive from the other’s way of being and doing church, the idea was eagerly picked up by ecumenists struggling to recapture the energy and vision of the post Vatican II period.

In some places, particularly where longstanding trust and friendships had already been established, the method is clearly working well. The Anglican Roman Catholic International Commission (ARCIC) has taken it up as an important part of its work towards a new document on authority and the way that ethical decisions are discerned within the two global communions. Other national and regional dialogue groups, notably in Canada and Australia, have found it a vital tool for reform, while others are exploring its potential for interfaith relations as well.

But like all children who grow up and move away from home, it has also developed in some unexpected directions away from its ecclesial origins, notably in driving new joint mission projects and shared worship services. In Africa, the ecumenical scene is greatly complicated by the rapid rise of new home-grown and proudly independent varieties of Christianity. The Jesuit provincial superior for East Africa, Fr Orobator explained that while traditional African religions provide a conducive climate for reception and welcome of the other, the phenomenal explosion of new Churches south of the Sahara presents serious challenges for the ecumenical movement. In Asia too, where Christians are mostly a tiny minority, discussion of ecclesial reform is often eclipsed by the pressing need for practical cooperation in the three areas identified by the Federation of Asian Bishops conferences as dialogue with the poor, with culture and with other religions.

So what am I taking away from this bewildering (and at times exhausting) array of inspiring people who are pioneering creative ways of progressing on the ecumenical journey? Firstly, there is no ‘one size fits all’ answer to the complex web of relations between the many different churches and Christian communities. An idea that works well in one country may not be easily adaptable to another, where tense relations are complicated by deep-seated cultural, ethnic, historical and linguistic differences dating back to colonial times and beyond.

Secondly, that ecumenical education, training, learning – call it what you will – is a key component for progress in any context where different churches are living, working and witnessing side by side. How can we hope to overcome the ‘scandal of division’ when most priests, pastors and people in authority have little or no real experience of our shared Christian heritage during their most formative years?

And thirdly, I’ve learnt that while academic ideas are important, there’s nothing like the personal experiences of men and women struggling with inter-church marriages and child rearing to show how the model of unity in diversity can and does work on a day to day basis. I was moved by stories these couples told to the conference about their lives in Canada, Kenya and Australia. Ray and Fenella Temmerman, of the Canadian Association of Interchurch Families pointed out how their efforts to remain faithful to their Catholic and Anglican traditions, while recognising and receiving gifts in the other, puts them “at the forefront of the changing ecumenical discourse.”  Associations like theirs, Ray stressed, are far more than a mere support network. Couples like them, he said, are “a sign and symbol” of what our churches strive to become and thus are an invaluable contribution to the whole ecumenical movement.