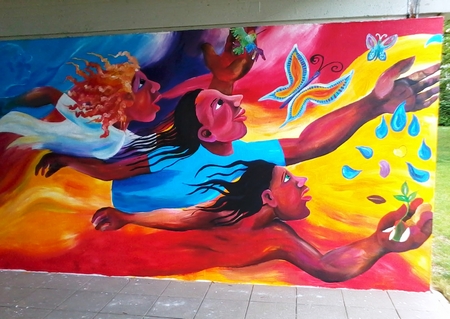 A mural painted by a group of artists led by Anne Stickel at the Mainz ecumenical assembly in Germany, 2014
From the WCC News

More than 400 representatives of German ecumenical groups attending an assembly in Mainz, Germany have affirmed their commitment to move forward in a “pilgrimage of justice and peace” – a call from the World Council of Churches’ (WCC) Busan assembly.

The ecumenical assembly in Mainz, held from 30 April to 4 May, addressed the theme “The future we desire – Life not destruction”.

The event was organized by a network of ecumenical groups in Germany, encouraging actions from the churches inspired by the call for a “pilgrimage of justice and peace”.

Featuring vibrant discussions on political, social, economic and ecological issues, as well as theological reflections, the Mainz assembly focused on themes such as “earth as our home”, ecumenical spirituality, economy of life, climate justice and “just peace”.

The sessions at the assembly were attended by local visitors along with the registered participants. Some 151 workshops were organized at the assembly addressing a number of themes, including seminars on transformative spirituality.

“Engagement for a just peace, climate justice and an economy in the service of life is surely met with strong resistance in a world of growing inequality and economic, political and military struggle for power and influence,” said the WCC general secretary Rev. Dr Olav Fykse Tveit in his greeting to the assembly.

In this situation, Tveit added, it is important to “encourage each other in prayer and worship, to learn of each other and to act together”.

Tveit also said that the theme of the Mainz assembly “gives direction for the way on which to discern, every day anew, what serves life and what destroys it.”

He said, “We know that this discernment is crucial because climate change, injustice and violence destroy, every day, the basis of life for millions of human beings and threaten the future of life on earth.”

The closing prayer service on Sunday culminated with the issuing of a statement from the Mainz assembly reflecting on justice, peace and integrity of creation. The statement highlights how churches in Germany, Austria, Switzerland and other countries in Europe have been encouraged by the call for a “pilgrimage of justice and peace”, and inspired to address these issues including “economy of life”.