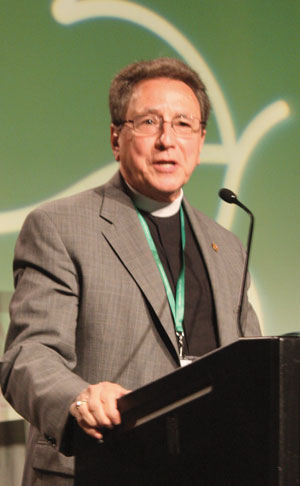 Rev. Donald J. McCoid has accepted the call to serve as executive for Ecumenical and Inter-Religious Relations in the ELCA

McCoid will succeed the Rev. Randall R. Lee, who will conclude his service as section executive on Oct. 31. Lee, 51, has led ELCA Ecumenical and Inter-Religious Relations since 2002.

“I am delighted that Pastor Donald McCoid has accepted the call to serve as executive for Ecumenical and Inter-Religious Relations in the ELCA,” Hanson said. “In his 20 years as bishop of the Southwestern Pennsylvania Synod, Don exemplified leadership that was grounded in Lutheran confessional theology and consistently ecumenically minded.”

“He is currently co-chair of the International Lutheran-Orthodox Dialogue. Pastor McCoid will enable the ELCA to build upon a strong foundation of ecumenical commitment and relationships. As the ecumenical landscape changes, the ELCA will be well served by the depth of Don’s theological wisdom and the breadth of his ecumenical vision,” Hanson said.

The presiding bishop said he was grateful for Lee’s service during the past six years. “He is highly regarded throughout this church and amongst our global and ecumenical partners,” he said. “With clarity, Randy has interpreted often complex ecumenical agreements. With consistency he has articulated the ELCA commitment to ecumenism. We pray God’s blessings as he discerns ways to continue to serve this church.”

“I am really looking forward to this appointment,” McCoid said in an interview with the ELCA News Service. “The ELCA has had a noble tradition in ecumenism, bilateral dialogues and full communion agreements. Those that have served in this role have lifted up the ELCA through our commitments and our statement on ecumenism.”

In his new role, McCoid said the ELCA must be attentive to how its ecumenical agreements are being lived out, and he said the church must have discussions about how it will approach ecumenism in the future.

McCoid, who was born in Wheeling, W.Va., earned a bachelor’s degree from West Liberty State College, West Liberty, W.Va., and a master of divinity degree from the Lutheran Theological Seminary at Philadelphia, one of eight ELCA seminaries. In 1983 he was presented an honorary doctorate by Thiel College, Greenville, Pa., one of 28 ELCA colleges and universities.

McCoid has worked in ecumenical circles for many years. He has served as co-chair of the Lutheran-Orthodox bilateral dialogue in the United States and is co-president of the international Lutheran-Orthodox dialogue, facilitated by the Lutheran World Federation (LWF). He also served on the Faith and Order Conference board and was a member of the North American Committee of the LWF.

McCoid served on the Religious Leadership Forum, Pittsburgh, an organization of Catholic, Jewish, Muslim and Protestant church leaders. He was chair of the Christian Associates of Southwestern Pennsylvania, Pittsburgh, and was a board member for the Christian Leadership Fellowship of Pittsburgh and Pennsylvania Council of Churches. McCoid served on the board of Lutheran Services in America and was chair of the board of the Lutheran Theological Seminary at Gettysburg (Pa), an ELCA seminary.

McCoid and his wife Saundra are parents of two adult children.