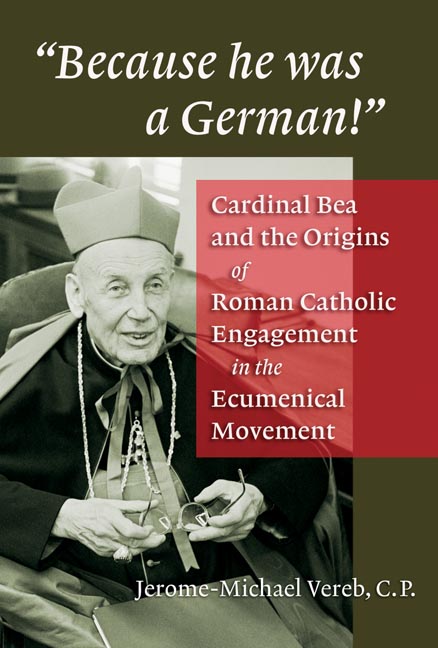 Because he was a German!
Cardinal Bea and the Origins of Roman Catholic Engagement in the Ecumenical Movement
Vereb, Jerome-Michael, Eerdmans, 2006. ISBN: 978-0-8028-2885-9

[Canterbury • ACNS4675] Grateful for the gracious guidance of the Holy Spirit, the Inter-Anglican Standing Commission on Unity, Faith and Order held its first meeting in Canterbury, England from 1 to 8 December 2009.

How and where does the global church discuss issues such as the nature and mission of the church, sources of authority and moral discernment in the churches? One long-standing forum for important discussions such as these is the Faith and Order Plenary Commission of the World Council of Churches. This body, while not officially decision-making, gathered in Kolympari, Crete, 7-13 October 2009. 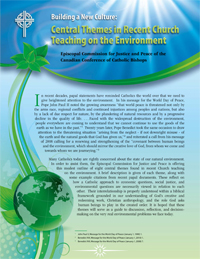 A new Canadian bishops’ document summarizing themes of recent church teaching on the environment is an urgent cry for action, says Bishop Donald Bolen of the Roman Catholic Diocese of Saskatoon. “Recent church teaching and papal statements are clearly telling us that the way we are living is not sustainable,” said Bolen, one of the bishops on the Canadian bishops’ Episcopal Commission for Justice and Peace, which released the new resource April 8 entitled “Building a New Culture: Central Themes in Recent Church Teaching on the Environment.” “Care of the environment is a growing area of concern for the Church and for all human beings, and in fact the Church has been speaking about this – and in particular, recent popes have been speaking about this – not only with regularity, but with passion,” said Bolen.
END_OF_DOCUMENT_TOKEN_TO_BE_REPLACED END_OF_DOCUMENT_TOKEN_TO_BE_REPLACED

The Pope writes: “God is a subject who makes himself known and perceived in an interpersonal relationship.” Thus the theologian cannot approach the theological task in a distant, neutral manner, as would a scientist or a mere observer. Theology flourishes through participatory knowledge in which reason, will, and affections are all engaged. The encyclical appeals to the biblical notion of the “heart” and insists that, as Blessed John Henry Newman expresses it: cor ad cor loquitur — heart speaks to heart. Theology reflects upon the Word of God, fully revealed, in the death and resurrection of Jesus, as abiding Love. The heart of God speaks to our heart his Word of Love in interpersonal encounter.
END_OF_DOCUMENT_TOKEN_TO_BE_REPLACED END_OF_DOCUMENT_TOKEN_TO_BE_REPLACED

Pentecostals and Charismatics are among the fastest growing Christian groups in the world. The question is to what extent the Pentecostals understand themselves as a church or a movement. This existential and ecclesiological issue remains ambiguous.

These views were shared by Dr Tamara Grdzelidze at the second Empowered21 (E21) Global Scholars Consultation, held from 8 to 10 July in Sydney, Australia.

Grdzelidze, programme executive for the Commission on Faith and Order of the World Council of Churches, participated in the consultation as an observer, along with Prof. Neil Ormerod of the Roman Catholic Church.

The consultation gathered Pentecostal scholars, mostly from Asia, to reflect on ecclesial, sociological, theological and academic challenges that “Spirit-empowered” Christianity faces in the 21st century.

The decision to undertake the task came after the second GCF global gathering at Manado, Indonesia, where it was felt that it was important to put down some theological markers so the wider Christian community could understand the story, practice and on-going life of the GCF.
END_OF_DOCUMENT_TOKEN_TO_BE_REPLACED END_OF_DOCUMENT_TOKEN_TO_BE_REPLACED

Baum shows how Catholic theologians, inspired by the Second Vatican Council (1962-65), uncovered the social meaning in the Christian message, allowing them to address many problems and concerns of contemporary society. With reliance on the Gospel, they supported Quebec’s new self-understanding, embraced its nationalism under certain conditions, fostered social solidarity, criticized the unregulated market system, demanded gender equality, and called for respect of new religious and cultural pluralism. Leaving behind the Catholicism of Quebec’s past, these theologians embraced the humanistic values of modern society, recognizing their affinity with the Gospel, while at the same time revealing the destructive potential of modernity, its individualism, utilitarianism, relativism, and its link to empire and capitalism.
END_OF_DOCUMENT_TOKEN_TO_BE_REPLACED END_OF_DOCUMENT_TOKEN_TO_BE_REPLACED

Senior theologians in Anglican Communion and Oriental Orthodox Churches recently made history by signing an agreement on their mutual understanding of Christ’s incarnation. This was not just a minor point of theology, rather it was a subject that divided the Church following the Council of Chalcedon* in 451 AD, leaving the Oriental Orthodox Churches separated from the Eastern Orthodox Churches and the Church of Rome. The work to reconcile these branches of the Christian family on the question of how the two natures, human and divine, were united in one human being: Jesus Christ began in earnest in the 1990s.
END_OF_DOCUMENT_TOKEN_TO_BE_REPLACED END_OF_DOCUMENT_TOKEN_TO_BE_REPLACED

“The work of the Congregation for the Causes of Saints, with Cardinal Angelo Amato, S.D.B., has been careful and attentive. The unanimity of both the commission of cardinals and the commission of theologians confirmed his martyrdom in odium fidei. … The martyrdom of Romero has given meaning and strength to many Salvadoran families who lost relatives and friends during the civil war. His memory immediately became the memory of other victims, perhaps less illustrious, of the violence”.
END_OF_DOCUMENT_TOKEN_TO_BE_REPLACED END_OF_DOCUMENT_TOKEN_TO_BE_REPLACED