Pride, greed and selfishness are destroying the planet just as they destroy human lives, said Cardinal Peter Turkson. However, with action inspired by good stewardship and solidarity, people can ensure that the Earth is “a nurturing home for every man, woman and child in every country and in every generation,” said the cardinal, president of the Pontifical Council for Justice and Peace. Turkson, who oversaw work on a first draft of Pope Francis’ upcoming encyclical on ecology, addressed the general assembly of Caritas Internationalis in Rome May 14. Pope Francis is publishing the encyclical, he said, “not to enter into scientific and financial debates, but to remind the world that our choices are ultimately moral in nature,” including when it comes to safeguarding creation. “This is an all-embracing moral imperative: to protect and care both for creation — our garden home — and for the human person who dwells therein,” the cardinal said. “Without stewardship, the Earth will be less and less habitable,” Turkson said. And without solidarity, “greed and rivalry will wreak ever greater havoc.”
END_OF_DOCUMENT_TOKEN_TO_BE_REPLACED END_OF_DOCUMENT_TOKEN_TO_BE_REPLACED 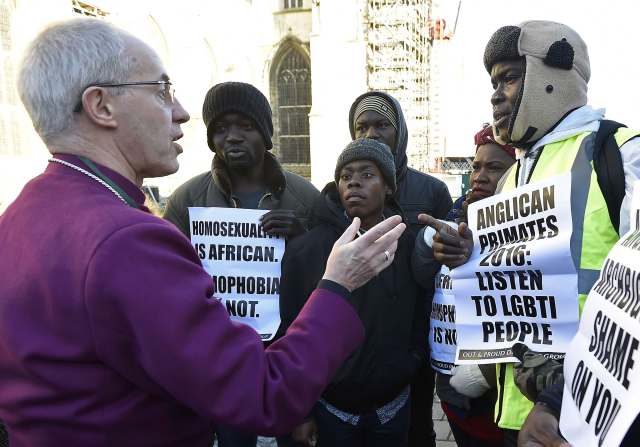 Because of the U.S. Episcopal Church’s moves to unilaterally change canon law to allow same-sex marriage, Anglican leaders voted to suspend Episcopalians from positions representing the Anglican Communion and from participating in some Anglican bodies. Primates meeting in Canterbury, England, said that for three years, members of the Episcopal Church will be barred sitting on Anglican bodies making decisions on doctrine and polity and from representing the Communion on ecumenical and interfaith bodies. The move comes in response to a policy allowing gay marriages, adopted last year by the General Convention, or governing body, of the Episcopal Church, the Anglican Church in the United States. The change in canon law in the U.S. has been strongly opposed by many of the theologically conservative African churches, some of whose leaders had threatened to walk out of the five-day primate meeting if the Episcopal Church was not penalized for its actions. The suspension was announced in a statement issued by the primates Jan. 14, a day earlier than planned because of leaks to the media.
END_OF_DOCUMENT_TOKEN_TO_BE_REPLACED END_OF_DOCUMENT_TOKEN_TO_BE_REPLACED

“True compassion does not marginalize, humiliate or exclude, much less celebrate a patient passing away,” the Pope said. “You know well that would mean the triumph of selfishness, of that ‘throwaway culture’ that rejects and despises people who do not meet certain standards of health, beauty or usefulness.”
END_OF_DOCUMENT_TOKEN_TO_BE_REPLACED END_OF_DOCUMENT_TOKEN_TO_BE_REPLACED

Speaking of his new appointment, Archbishop Bolen, who was ordained a priest in Regina and served as archdiocesan vicar general and chair of the archdiocesan ecumenical commission, said: “To be moved from the Diocese of Saskatoon is painful, because it has been such a grace-filled experience to live and to serve here as bishop, but, at the same time, to move to the Archdiocese of Regina is to go home. I am profoundly grateful to remain in my home province.”
END_OF_DOCUMENT_TOKEN_TO_BE_REPLACED END_OF_DOCUMENT_TOKEN_TO_BE_REPLACED