The decision to undertake the task came after the second GCF global gathering at Manado, Indonesia, where it was felt that it was important to put down some theological markers so the wider Christian community could understand the story, practice and on-going life of the GCF.
END_OF_DOCUMENT_TOKEN_TO_BE_REPLACED END_OF_DOCUMENT_TOKEN_TO_BE_REPLACED

That generated considerable curiosity, particularly in ecumenical circles. Until now, the Vatican has not had any formal contacts with non-Communion Anglicans. No further details were available until this week when a video was posted on YouTube. During their visit in January, Pope Francis and Bishop Palmer recorded a video message on the bishop’s iPhone. The message was for a conference of leaders from Kenneth Copeland Ministries, a Pentecostal mega-church ministry. Palmer was scheduled to address the conference a few days later, so Francis offered to send greetings. They recorded the video on the spot, and there is no indication that the Vatican staff were aware of its existence until it appeared on YouTube two days ago.
END_OF_DOCUMENT_TOKEN_TO_BE_REPLACED END_OF_DOCUMENT_TOKEN_TO_BE_REPLACED

The fate of refugees and the struggles of immigrants in general is on the agenda for Canada’s Catholic bishops, but the bishops are steering clear of a national campaign supported by several church and lay groups which has been critical of the government’s record on refugee rights. The Canadian Conference of Catholic Bishops is currently working on a statement concerning refugees, migrants and immigrants to be released at an unspecified date. “In general, the conference does not release preliminary information about the development and eventual timelines of its various projects,” said CCCB spokesman René Laprise in an e-mail. “This is in order to ensure that the bishops and their advisors, both internal and external, have full freedom in drafting, developing and approving any eventual texts. This also avoids raising expectations and risking disappointments about the topics, nature and publication schedules of possible future texts.” In December, the bishops declined to sign a Human Rights Day statement calling on Ottawa to change course on refugee rights. Co-ordinated by the Canadian Council for Refugees, the statement called for fairness, respect and compassion in the treatment of refugees. “Canada can and must do better,” said the Dec. 10 statement. Signatories to the open letter ranged from former solicitor general Warren Allmand to Blue Rodeo guitarist Jim Cuddy. They also included the provincial superiors of both the English and French Canadian provinces of the Jesuits, the primate of the Anglican Church of Canada, the national bishop of the Evangelical Lutheran Church in Canada, the moderator of the United Church of Canada and the moderator of the Presbyterian Church of Canada.
END_OF_DOCUMENT_TOKEN_TO_BE_REPLACED END_OF_DOCUMENT_TOKEN_TO_BE_REPLACED 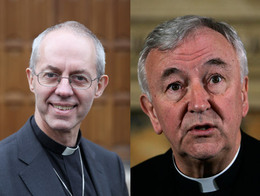 The proceedings of the Synaxis were carried out in a very fraternal spirit; the Hierarchs discussed maters concerning the life of the Orthodox Church in the contemporary world, and particularly in regions where Orthodoxy and Christianity in general face serious problems and difficulties; the Hierarchs also expressed their support and profound interest of the Orthodox Church in its entirety concerning their fellow human beings suffering in those regions. Above all, the Synaxis considered the prevailing situation in the Middle East and recent developments in Ukraine, as well as the ongoing uncertainty about the fate of the bishops, Metropolitan John of Aleppo, and Yuhanna Ibrahim of the Syriac Church, who were kidnapped by unknown persons a very long time ago.
END_OF_DOCUMENT_TOKEN_TO_BE_REPLACED END_OF_DOCUMENT_TOKEN_TO_BE_REPLACED

The Rev. Ann Tiemeyer, NCC Interim Associate General Secretary for Joint Action and Advocacy, said the program “will include ample opportunity for all attendees to engage with one another through group discussion, input from expert resource people to help inform our discussion, and celebratory service with words from interfaith guests and an address from Jim Winkler.”
END_OF_DOCUMENT_TOKEN_TO_BE_REPLACED END_OF_DOCUMENT_TOKEN_TO_BE_REPLACED

The motto of the pilgrimage, according to the website, “is at the very core of his trip to the Holy Land”. Francis and Bartolomaios are scheduled to meet in the Basilica of the Holy Sepulchre to commemorate and renew the desire and longing for unity among Christians, expressed by Pope Paul VI and Orthodox Patriarch Athenagoras 50 years ago in Jerusalem. In addition, the logo depicts the embrace between the two brothers, Apostles Peter and Andrew: the first two disciples called by Jesus in Galilee, patrons respectively of the Church of Rome and the Church of Constantinople.
END_OF_DOCUMENT_TOKEN_TO_BE_REPLACED END_OF_DOCUMENT_TOKEN_TO_BE_REPLACED