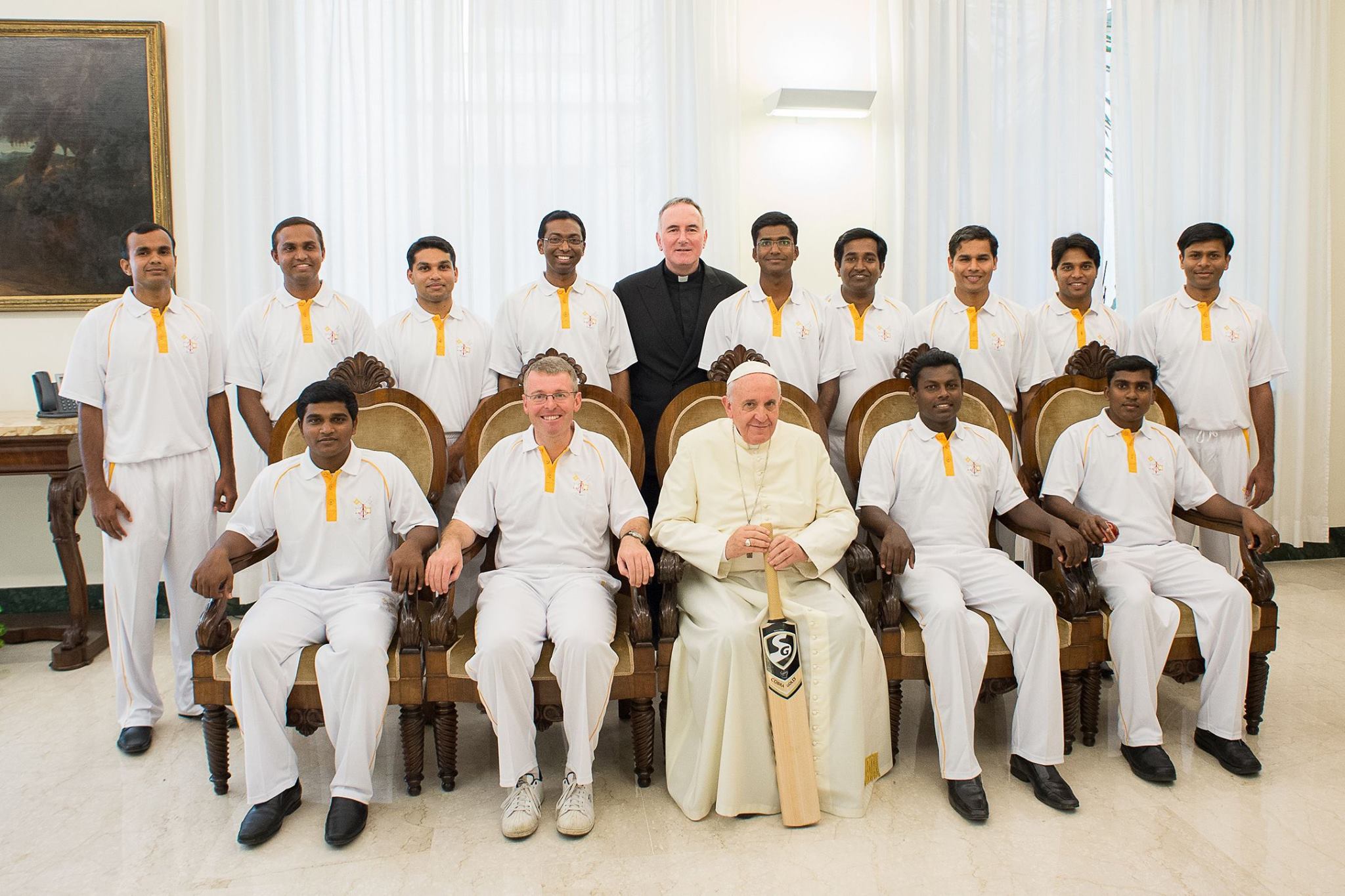 Pope Francis has given his blessing to the Vatican’s international cricket team as it prepares to take on the Church of England. The side of Catholic priests are preparing for their first tour to England, which will include a match with the Church of England XI in Canterbury. Pope Francis, who is a supporter of Buenos Aires football side San Lorenzo, put on a cricket cap and signed a bat that the team will take with them during their tour of England, which begins on Friday. After the tour the bat will be auctioned in order to raise money for a joint Catholic and Anglican campaign against modern-day slavery and indentured labour, the Global Freedom Network, the Vatican said. The papal XI will play matches against chaplains of the British armed forces at Aldershot and the Royal Household Cricket Club at Windsor Castle, as well as two other games. Then in Canterbury on September 19 the team will take on the Anglican XI.
END_OF_DOCUMENT_TOKEN_TO_BE_REPLACED END_OF_DOCUMENT_TOKEN_TO_BE_REPLACED

A meeting convened by the Global Christian Forum in Strasbourg, France, including representatives from the Vatican, the World Council of Churches, the World Evangelical Alliance and the Pentecostal World Fellowship, agreed on 9 September to press ahead with a global gathering on the issue of ‘Christian discrimination, persecution and martyrdom’ for late 2015.
END_OF_DOCUMENT_TOKEN_TO_BE_REPLACED END_OF_DOCUMENT_TOKEN_TO_BE_REPLACED

The dialogue is sponsored by the Saskatoon Evangelical Ministers’ Fellowship (SEMF) and the Roman Catholic Diocese of Saskatoon. The group was established in 2011 to build upon earlier efforts to draw our churches together. The twenty members of the dialogue are drawn from across the Evangelical and Catholic communities with both clergy and lay people well represented. The dialogue spent two years exploring issues that have historically divided Catholics and Evangelicals before concluding that a statement of the faith we share in common would assist in promoting the growing relationship between our churches. Over a year in drafting and revision, the statement offered to our church at this time is not intended to be a final or complete exposition of these doctrinal matters or of all of the matters essential to Christian faith. We intend to give an account of the hope that we share for the visible witness of Jesus Christ by his followers in Saskatoon.
END_OF_DOCUMENT_TOKEN_TO_BE_REPLACED END_OF_DOCUMENT_TOKEN_TO_BE_REPLACED

Many have reacted to these changes with grief and anger. In their outrage some have understandably focused on the neglect and carelessness, both in private industry and in government regulation, that have contributed to these changes. However, an honest accounting requires a recognition that we all participate both as consumers and investors in economies that make intensive and insistent demands for energy. In addition, as citizens we have chosen to support or acquiesce in policies that shift the burdens of climate change to communities that are most vulnerable to its effects. People who are already challenged by poverty and by dislocation resulting from civil war or famine have limited resources for adapting to climate change’s effects.
END_OF_DOCUMENT_TOKEN_TO_BE_REPLACED END_OF_DOCUMENT_TOKEN_TO_BE_REPLACED 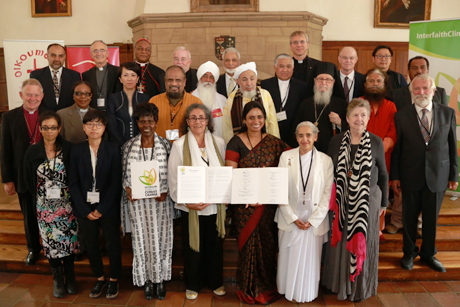 As hundreds of thousands of people flooded through the streets of New York City on 21 September in a march for action on climate change, 30 faith leaders representing nine religions signed their names to a statement calling for concrete actions to curb carbon emissions. The document was the centrepiece of an interfaith conference jointly hosted by the World Council of Churches (WCC), a body that includes 345 churches representing about 560 million Christians worldwide, and Religions for Peace, an interfaith coalition with members in more than 70 countries. Signatories hailed from 21 countries on six continents. “When in January I listened to the general secretary of the United Nations, Ban Ki Moon, calling the world’s heads of state for a summit on climate change, I thought we also have to get together as leaders of faith communities to offer our contributions,” said Rev. Dr Olav Fkyse Tveit, the WCC general secretary. Large changes require “deep and strong conviction” which, he said, can be found in the “beliefs, rituals, symbols, sacred texts and prayers of faith [that] give meaning and direction for a large portion of the world’s population.”
END_OF_DOCUMENT_TOKEN_TO_BE_REPLACED END_OF_DOCUMENT_TOKEN_TO_BE_REPLACED 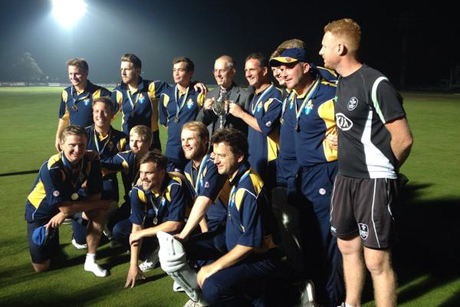 Church of England cricketers beat a Vatican team on Friday in a historic match in support of a joint initiative to wipe out modern slavery and human trafficking. The Archbishop of Canterbury, Justin Welby, congratulated both sides and presented the trophy to winning captain Stephen Gray after the match, played in the shadow of Canterbury Cathedral at Kent County Cricket Ground. The match was organized to raise awareness and funds for the Global Freedom Network, a joint initiative between religious leaders including Pope Francis and the Archbishop of Canterbury which is committed to eliminating modern slavery and human trafficking across the world.
END_OF_DOCUMENT_TOKEN_TO_BE_REPLACED END_OF_DOCUMENT_TOKEN_TO_BE_REPLACED

The centenary celebration Sept. 24 of what is now known as the Montreal School of Theology will probably pass almost unnoticed, at a time when religion is often a topic of strife. But in its quiet way, the anniversary is also a reminder that religious strife and debate in Montreal, Quebec and the rest of Canada have been around for a while. The three theological seminaries on the McGill University campus — Presbyterian, United Church and Anglican — will be celebrating 100 years of what is now known as ecumenism, a word hardly anyone used in that sense a century ago. The celebration will be a modest affair. Presbyterian College, the (United Church) United Theological College and the (Anglican) Montreal Diocesan Theological College will have open house at their respective quarters on University St. between 3:15 and 4:15 p.m. And there will be worship at 4:30 down the street in the Heritage Chapel of what was known until 1972 as Divinity Hall, but is now McGill’s Birks Building. On Friday, a select group will ponder the future of theological education in Montreal.
END_OF_DOCUMENT_TOKEN_TO_BE_REPLACED END_OF_DOCUMENT_TOKEN_TO_BE_REPLACED

In the name of the Triune God, and with the blessing and guidance of our Churches, the International Commission for Anglican-Orthodox Theological Dialogue (ICAOTD) met at St George’s Anglican Cathedral, Jerusalem, from 17 to 24 September 2014. The Commission is grateful for the generous hospitality extended by Bishop Suheil Dawani and the Diocese of Jerusalem. The Commission was presented with resources both Anglican and Orthodox on issues concerning the beginning and end of life, and it was agreed that these matters will be discussed in the next phase of its work. The Commission discussed at length the draft of an agreed statement on the theological presuppositions of the Christian understanding of the human person, created in the image and likeness of God. At its next meeting it intends to consider the practical implications and the ethical questions, of pressing concern in today’s world, that follow from these presuppositions.
END_OF_DOCUMENT_TOKEN_TO_BE_REPLACED END_OF_DOCUMENT_TOKEN_TO_BE_REPLACED

The King Abdullah bin Abdulaziz International Centre for Interreligious and Intercultural Dialogue, based in New York, U.S.A., yesterday published a declaration of principles, signed by the foreign ministers of Austria, Saudi Arabia and Spain, as well as by Fr. Miguel Angel Ayuso Guixot, M.C.C.J., secretary of the Pontifical Council for Interreligious Dialogue, in his role as Holy See Observer, to help build a united front to the humanitarian crisis in Syria and the north of Iraq, as well as in other regions of the world. The declaration was approved unanimously by the multireligious Board of Directors of KAICIID, who represent the major world religions of Buddhism, Christianity, Hinduism, Islam and Judaism.
END_OF_DOCUMENT_TOKEN_TO_BE_REPLACED END_OF_DOCUMENT_TOKEN_TO_BE_REPLACED