The President and Board of Directors of the Canadian Centre for Ecumenism is pleased to announce that Dr. Adriana Bara has been appointed Executive Director of the CCE as of August 1st, 2013.

Originally from Romania, Adriana Bara with her husband and two children moved to Canada several years ago. With a degree in civil engineering, she worked for a few years in this field and then pursued studies in theology first in Romania and then in Montreal (M.A. Concordia and Ph.D. Université de Montréal). She has been teaching at Concordia University since 2009. Dr. Bara worked at the Centre for Research and Documentation of Saint Joseph’s Oratory and since 2008 as volunteer with the Canadian Society of Patristic Studies where she is Communications Officer and Editor of the e-Bulletin.

An active member of the Romanian Orthodox Church, Dr. Bara is fluent in three languages. From her youth, she has recognized the importance of respecting human rights and is convinced of the key role played by ecumenism and interreligious dialogue in our modern pluralistic society. This is one of the reasons she chose to settle in Canada. She attaches great importance to dialogue, openness and acceptance of others. These are also the values of the Canadian Centre for Ecumenism. The President and Board of Directors are confident that Dr. Bara will lead the Centre with intelligence and discernment in an environment increasingly multicultural and multireligious.
END_OF_DOCUMENT_TOKEN_TO_BE_REPLACED END_OF_DOCUMENT_TOKEN_TO_BE_REPLACED

“Jeff Gros was passionately devoted to his church and to the quest for church unity,” said Dr. Antonios Kireopoulos, NCC associate general secretary, Faith & Order and Interfaith Relations, who served as a Faith & Order intern from 1989 to 1990 during Gros’ tenure at the Council.

“He was a model for the Council’s commitment to ecumenical cooperation and a mentor both to his contemporaries and to future generations of ecumenists, including me,” Kireopoulos said Tuesday.

“It is with deep sadness that we have received the news of Brother Jeffrey Gros’s passing away. We remember his profound contributions to Christian unity and his support of the WCC’s Commission on Faith and Order,” said the WCC general secretary. 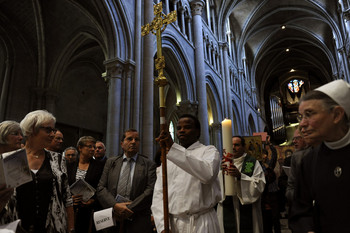 On the first visit by a pope to the United Nations, in 1965, Pope Paul VI memorably called for “No more war, war never again.” Blessed John Paul II was a constant campaigner for peace, calling the interfaith meetings in Assisi, praying for an end to violence in the Balkans, and doing everything he could, publicly and privately, to prevent the 2003 invasion of Iraq.
END_OF_DOCUMENT_TOKEN_TO_BE_REPLACED END_OF_DOCUMENT_TOKEN_TO_BE_REPLACED

Ahead of a new season, U.S. Christians are debating the wisdom of being fans of the country’s most popular sport because of the violence inherent in American football. On one side of the debate are believers like Rev. Rick McDaniel, who in an op-ed for Fox News Saturday said that football is biblical. “There is much in the Bible that supports the qualities needed for playing football,” he said. McDaniel cited godly character traits such as hard work and self-sacrifice as coming from playing football. In addition, he noted that players learn how to win or lose gracefully. On the other hand, there are those who disagree with the pastor. These Christians say that the game is far too brutal and should not be endorsed by a follower of Jesus.
END_OF_DOCUMENT_TOKEN_TO_BE_REPLACED END_OF_DOCUMENT_TOKEN_TO_BE_REPLACED

Continuing its focus on Christian anthropology, specifically what it means to be a human person created in the image and likeness of God, the Commission devoted significant efforts to the review of the draft of its joint theological work on the subject. Reflection on the theology of the glory of creation and the uniqueness of humanity in the created order drew the Commission into deep discussion. Further, the Commission worked at length on the specific expression of image and likeness, considering the thematic components of the subject, with particular attention to its scriptural basis. As part of the discussion of human relationships, the Commission observed that it is the teaching of all the Orthodox and Anglican churches that marriage is between a man and a woman. The draft text, which was developed through the studies of previous meetings, was enhanced at this meeting by contributions on the subjects of the human being in society; the human being as a social being; attaining personhood through community from a traditional African perspective; and repentance, transformation and holiness. The Commission agreed that a newly appointed drafting group would work with the existing draft for the next meeting, taking into account the many pertinent comments and theological considerations presented at this meeting.
END_OF_DOCUMENT_TOKEN_TO_BE_REPLACED END_OF_DOCUMENT_TOKEN_TO_BE_REPLACED

On Sept. 10, the Quebec government released details of the proposed Charter of Quebec Values that would prohibit public servants from wearing visible signs of religious belief such as Jewish skullcaps, Muslim hijabs, Sikh turbans, large crucifixes or Star of David jewellery. The government released a chart showing that small symbols such as a tiny crucifix around the neck or on earrings or a small Star of David ring would be allowed. These rules would apply to everyone employed in the public sector. The charter would also bar people whose faces are covered from providing or receiving public services.
END_OF_DOCUMENT_TOKEN_TO_BE_REPLACED END_OF_DOCUMENT_TOKEN_TO_BE_REPLACED

An “open and unprejudiced dialogue” between Christians and those of no religious faith is “rightful and precious” today for at least two reasons, Pope Francis wrote. Such a dialogue could “open doors for a serious and fertile encounter” between secular culture and Christian culture, which have lost the ability to communicate due largely to modern views of faith as the “darkness of superstition opposed to the light of reason.”
END_OF_DOCUMENT_TOKEN_TO_BE_REPLACED END_OF_DOCUMENT_TOKEN_TO_BE_REPLACED

The Anglican-Lutheran International Co-ordinating Committee (ALICC) held its first meeting in the Cultural Centre Sofia, Helsinki, Finland from 19 to 25 September 2013, under the leadership of the Most Reverend Maurício Andrade, Primate of Brazil, and of Bishop Michael Pryse of the Evangelical Lutheran Church in Canada. The meeting was hosted by the Lutheran World Federation with the generous assistance of the Evangelical Lutheran Church of Finland.

The Co-ordinating Committee studied the mandate given by the Lutheran World Federation (LWF) and the Anglican Communion. The focus of this work is to monitor and encourage existing Anglican-Lutheran relations, as well as to advance co-operation between the two Churches in areas where there are not yet any formal agreements. To enable the Committee to function as an encourager as well as a catalyst, the Committee has begun a process of mapping agreements, initiatives and projects in different regions. This mapping project is an ongoing task for the Committee and we urge Churches, in both communions, to provide information to further this task.
END_OF_DOCUMENT_TOKEN_TO_BE_REPLACED END_OF_DOCUMENT_TOKEN_TO_BE_REPLACED